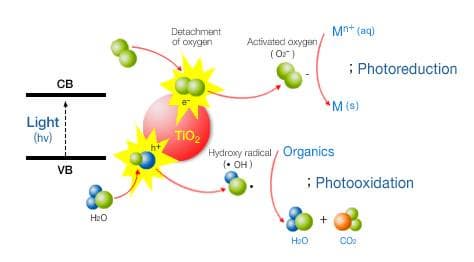 Photocatalyst absorbs light and causes various chemical reactions. Metal oxide and sulfide are known for photocatalyst, and especially TiO2 is being widely commercialized due to high photocatalytic efficiency, chemical stability and wide range of application.

Under the condition of light energy which is bigger than band-gap energy(under 380nm) of the TiO2, it occurs photo-oxidation, photo-reduction and hydrophilic reaction. This reactivity can be used for a variety of uses. For example, the dissolution of hazardous VOCs, the removal of endocrine disruptors, the recovery of heavy metal, the reduction of NOx and SOx, antibiotics, sterilization, deodorization, anti-fogging, decontamination and self-cleaning.

3.Functions of a photocatalytic TiO2

Welcome to the ceramic specialty company. NANO is consistently pursuing leading company in ceramic raw material powder and extrusion products. We established a mass production line for nanoscale photocatalytic powder at the end of 2001. The new low-cost processing technology was certified by Ministry of Commerce, Korea, in July 2001. In addition, the pilot-plants for WS2 solid lubricant powder and ceramic honeycomb catalyst were also successfully completed in the early of 2001 after more than 3 years of intensive R&D. We will thus complete large-scale ceramic honeycomb production line in the middle of 2002.

Based on the our initial products of photocatalytic TiO2 and WS2 lubricants, we diversify our powder products for IT ceramic parts and ET ceramic honeycomb using our raw materials. Various applications of our raw materials such as self cleaning building materials and air purifying system will be presently shown in the market. NANO's key organization is R&D center consisting of 3 teams depending on the aimed processing , i.e., Raw Materials, Extrusion and Application. Our R&D activities mainly focus on developing the new low-cost processing.

I again appreciate you for your visit to NANO homepage. Your suggestions will be promptly responded. 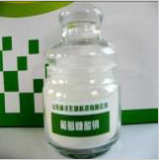