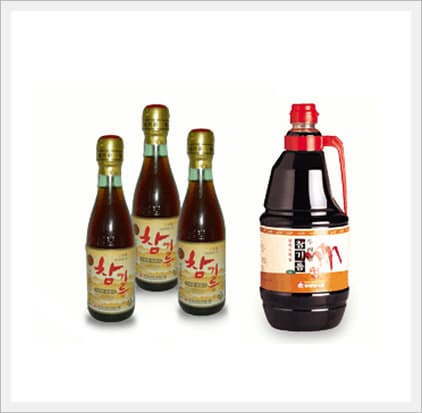 Composition and Effect of Sesame Oil

The main component of sesame oil, linolenic acid reduces cholesterol in our blood.
As it is not produced in our body, we should take linolenic acid regularly to prevent adult diseases.
Also, it is effective for headache, stomach ache and nervousness. Sesame is the oldest ingredient for edible oil and originated from India.

Currently, it is grown in China, India, Africa, South America, Central America, and Mexico. 50% of sesame is oil, which is mainly collected by compression. Since it contains oil, sesame gives strength and works well on constipation.

When it is taken with other medicine, it helps recovery from illness. "Sinnongbonchogyeong (New Principle of Agriculture) says, "Sesame is good for the body as it protects major organs and activate metabolism." And "Sikpyoboncho" (Book on Plants) says, "Sesame controls the function of stomach and bowels, helps blood circulation, adds nutrients to the skin, and prevent grey hair."

Sesame is originated from Africa and India.
It is known that sesame has the longest history of cultivation.
It is not clear when sesame entered Korea.
As sesame was introduced to China around the Han era and Japan in AD 538, it came to Korea from China before Japan.

Also Sapona(Gynostemma pentaphyllum extract) and Green Chilli Pepper Seasonings Sauce and Jajang for children have already been developed and are going to be launched into market in late 2009.

We are not only supplying our products in domestic market but also exporting them to the U. S., Europe, Australia, New Zealand and the United Kingdom.