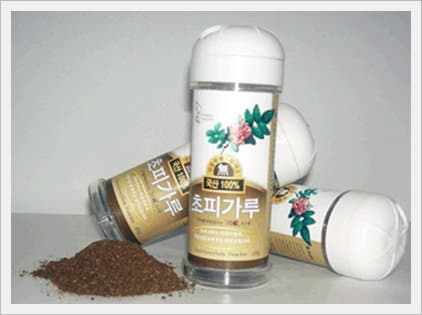 Chopi is called jepi in Gyeongsang-do, jenpi in Jeollado, jopi in North Korea, and shanshowoo in Japan. It is effective for removing undesirable odor from vegetables, meat and other ingredients. When it is used as a food additive, it prevents acidification.

When it is used to various jjigae, sauces, pork and other roasted dishes, it removes undesirable odor from vegetables, meat and other ingredients, and helps you to enjoy the unique taste of chopi.

Also Sapona(Gynostemma pentaphyllum extract) and Green Chilli Pepper Seasonings Sauce and Jajang for children have already been developed and are going to be launched into market in late 2009.

We are not only supplying our products in domestic market but also exporting them to the U. S., Europe, Australia, New Zealand and the United Kingdom.