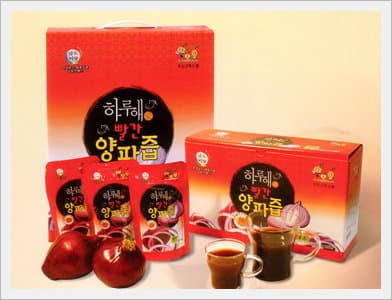 This company was designated to the Support Country the Industrial Processing for the regular stability of the price of onion through adjustment of demand and supply.

From 1998.6.1, it have sold the onion beverage named The onion village abundant in good water. In the first year of its selling(during 7months in 1998) , the sales revenue accounted for 450 billion won and this year it accounted for about 1000billion won up to Sept.30,1999 and has been exporting to the U.S. Even though its unique idea and the trailblazer of this field, it couldnt afford to advertise its high quality products in the first place.

On the other hand, in a domestic market, it was supplied to the large sales department include the National Agriculture Cooperative Federation, in 1999 its activity is advanced through an air force and a naval force and it plan to provide its product to the army which has about 2000 sales store, and especially to make a new market line in a foreign area, it have tried to various sales promotion activity such as via the internet, hand in this product to the Food Trade Show and invite a foreign investor and buyer.

In 1999, it make a variety of promoting sales campaign by participating in the International Healthy Food Show (5.24-5.28), Tokyo Trading Show (3.9-3.12), Hong Kong Trading Show, etc. By virtue of These enthusiastic sales promotion campaign, it is expected that the future of its exporting is very positive and bright.

Particularly the connection with Japan through the Hukuoka Trading show, it exchanged the intended promise on the basis of an exclusive sale. If it completes to make a deal with Japan. the profit which it could bring to us is accounted for more than US$1billion.