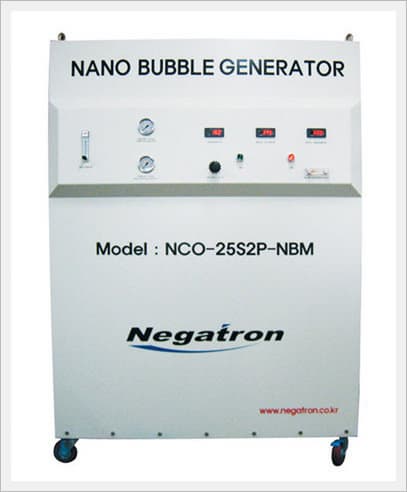 Self Pressurization Effect
As the volume of liquid dissolved gas under the specified temperature is to be dissolved in proportion to the partial pressure of corresponding gas. Which demonstrates the higher solvency with the more minute bubbles, in theory the pressure inside the bubbles become infinite at the moment of extinction, As a simplified comparison, the gas solvency of 10µm bubble with diameter is approximately 20,000,000 times of 1mm diameter bubble.

Electric Potential Characteristic of Micro Nano Bubble
Smaller size bubbles demonstrate the better washing effect with higher adhesive force even in comparison with the particles of high zeta potential. Moreover, the oxygen amount per unit volume is increased enhancing the sterilization effect when the size of bubble is within the range of nano level. In other words, the minuteness of bubble size increases the washing or separation enhancing the sterilization effect accompanied with the increase of dissolved oxygen volume.

Compressive Fracture Characteristic of Micro Bubble
Compressive fracture characteristic is a well known symptom in ultrasonic engineering. Which produces the extremely high temperature of 4,000 ~ 6,000°C instantaneously with Self Pressurization Effect generated by the gas pressurizing force of surface tension residing inside the bubble and disappear after repeating the chain reactions of pressurizations and bursts within instant of 1 out 1 million second. At this moment, the generation of free radicals such OH & etc., decomposes the bacteria and harmful chemical substances residing inside water.

Adhesion Characteristic of Micro Bubble
The smaller sized bubbles provide the ease of infiltration allowing the adhesion with particles against the high electric potential. At the moment, the cleaning process becomes effective as the relative gravity of particles is decreased once the particles and bubbles are adhered together.