Let's Be, one of the best selling canned coffee drinks in Korea, has five kinds of tastes. Let's Be is made from the best Colombian coffee blended with milk for a smooth, gentle and rich taste.

12LOTTE CHILSUNG BEVERAGE was founded in May 1950 originally named as Dongbang beverage company and changed its name to LOTTE CHILSUNG BEVERAGE in 1974. The company entered into production and sales partnership with Pepsi in 1976, DelMonte in 1982, and Gatorade in 2001, laying the basis for becoming an international beverage manufacturer. In 2013 LOTTE CHILSUNG's sales totaled 2,216 billion Korean Won(US$ 2 billion) with the 41% domestic market share. Today LOTTE CHILSUNG has become a major company which employs about 5,300 people and owns 13 sales departments, and 24 sales branches throughout Korea.

Recently, LOTTE CHILSUNG has striven to diversify its overseas markets such as Japan, China, Russia, America, Southeast Asia, Middle East and Africa, in order to achive its vision to become the world's best beverage manufacturer.

LOTTE CHILSUNG will implement the long-term business strategy that looks to the 21st century, and make a strong foundation for the secound take-off through continuous management rationalization and quality innovation. LOTTE CHILSUNG aims to become the world-class beverage manufacturer.

Along with the regional market expansion every effort has been made to achieve better qulaity. As a result LOTTE CHILSUNG succeeded in acquiring Japan's JAS mark in 1989 proving that it had the world-class quality level. In addition, in 1994 and 1995 consecutively, LOTTE CHILSUNG was ranked among "100 Best Quality Competitive Companies" and became the first Korean beverage manufacturer to obtain the ISO 9001 certificate. In 2002 LOTTE CHILSUNG obtained the ISO 14001, 22000 and the HACCP certificate.

Since our entry in the Chinese market in 2005, we have set up a local branch office in Henan, as well as a sizable local production plant. We are currently formulating long-term marketing strategies and sales expansion tactics to cement our standing as a major beverage label in one of the world's largest markets. While leveraging on the brand value of long-time favorites, we are also developing functional products and premium lines to expand the mineral water, tea, coffee, and high-end liquor market.

Furthermore, to lay down the solid groundwork for rising as the topmost beverage company in Asia, we are penetrating into new overseas markets such as India. We are on an endless pursuit to accomplish 7 trillion won in sales revenue and be named as one of Asia's top 10 beverage companies by 2018. 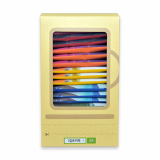