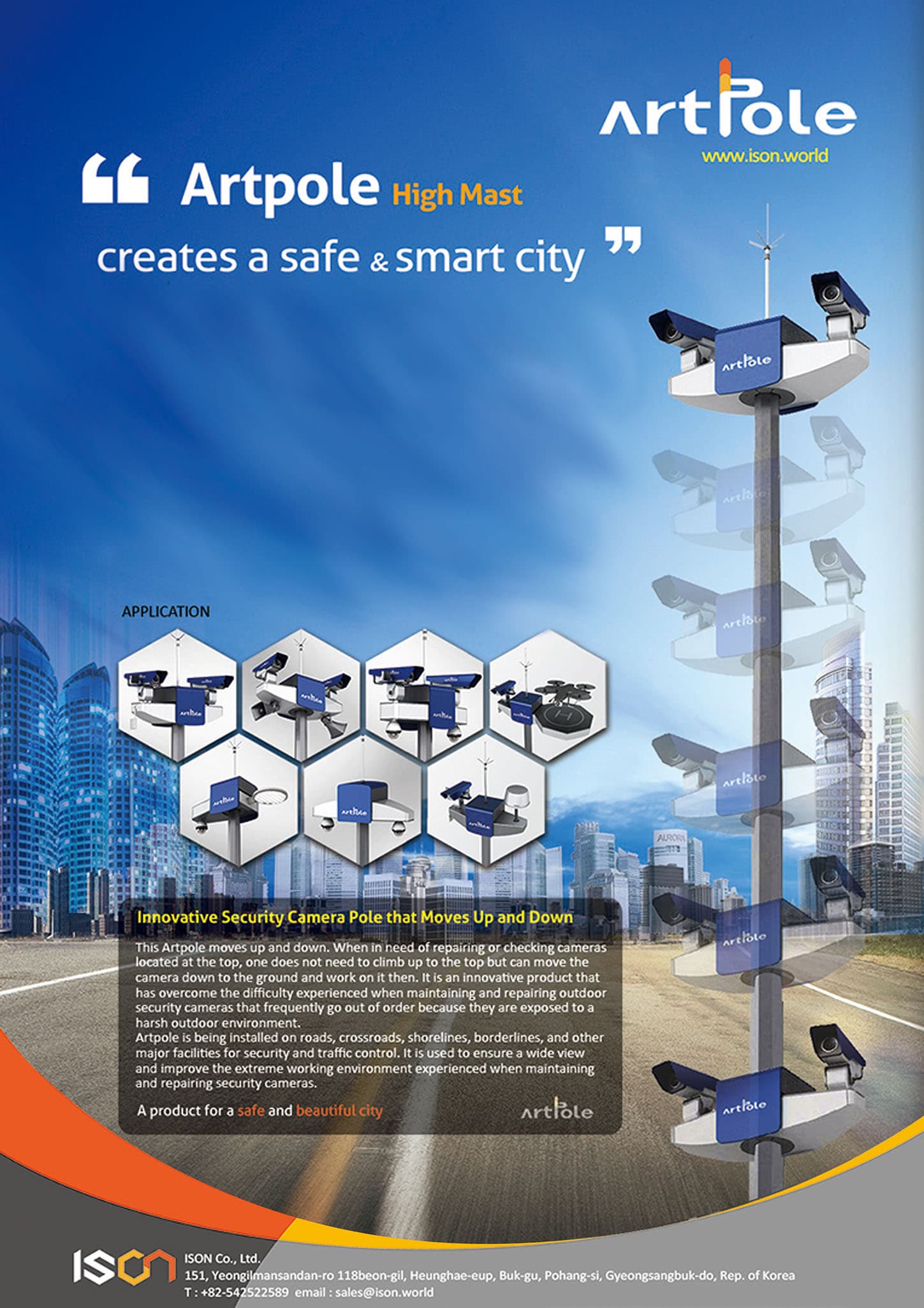 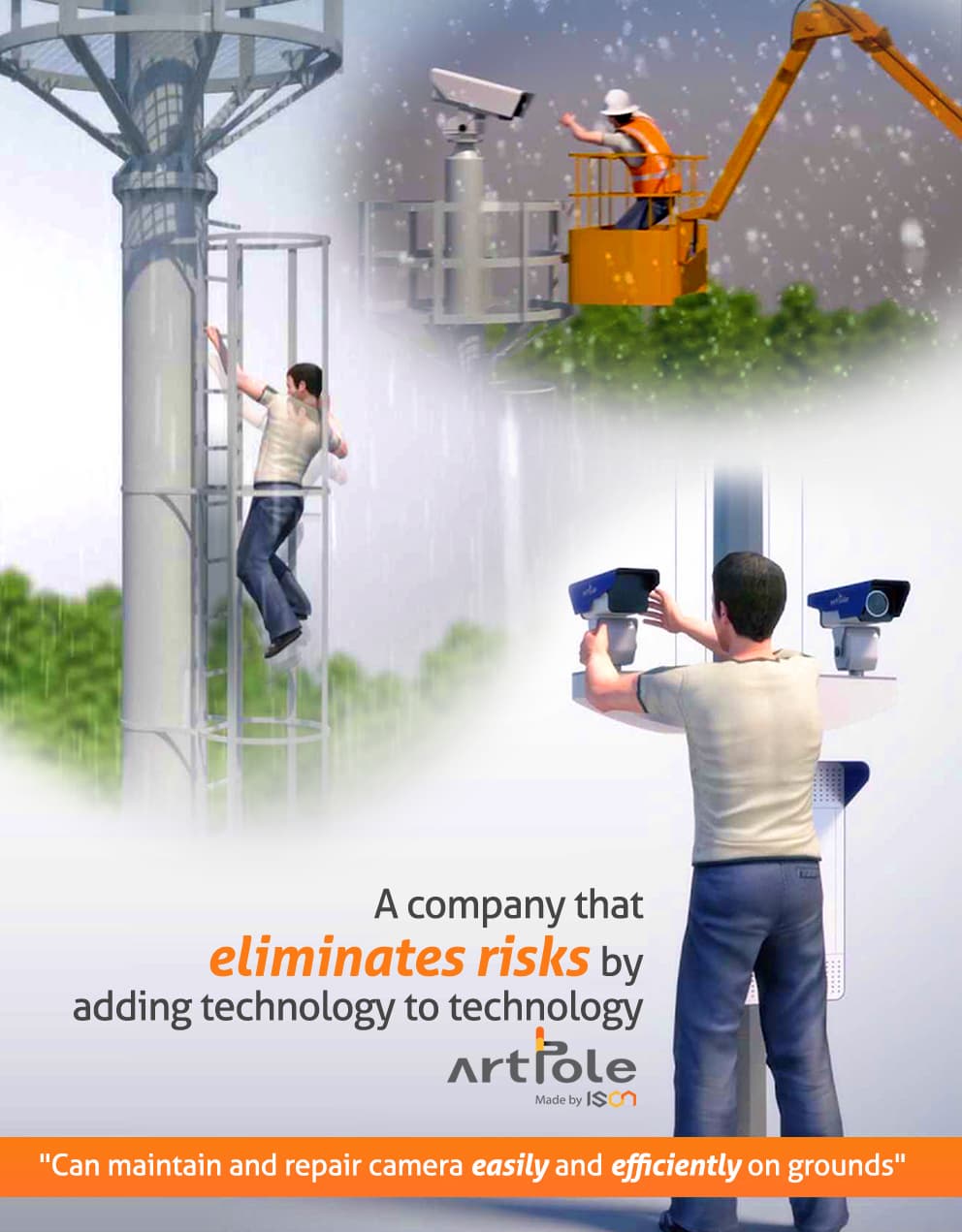 Breaking out of the box, ISON introduces the CCTV maintenance Artpole

"Why do people have to climb up to dangerously high places? We could just bring the CCTV down to our level." CEO of ISON, Eunk-Uk Kim broke the paradigm of having a fixed CCTV system. CCTVs are an essential part of safe-living, allowing us to keep a close eye around the little nooks and crevices around the city. When these tools need maintenance, not only do surrounding traffic have to be restricted and controlled, but workers need to climb up to the fixed CCTV to perform checks and repairs - obviously as the height of the fixtures increase, the level of danger for these workers also skyrocket. An unexpected gust of wind makes it incredibly difficult for the workers to maintain their balance and composure.
There are also safety risks in case that tools or parts fall to the ground. ISON released 2016 "Artpole" in hopes of reducing these risks while naturally blending in with its surroundings.

Previous CCTV systems required the use of elevator cranes - other CCTV systems included an integrated ladder-shaped pole which allowed maintenance personnel to climb up the pole itself, but these poles are usually surrounded with wire fences, making it an eye-sore. The cranes also come with the risk of falling.

Artpole enables users to raise and lower the CCTV pole which allows the user to maintain the system at ground level. Workers do not need to climb up to high places to fix the camera as a motorized or manual winch system can safely bring the CCTV down to the worker's level. The winch system can be controlled with a button, a remote controller or from a control center at a remote location. Artpole was designed to have two cameras fixed on two sides, but can also be used with one camera while still having it's parallel balance well maintained.

The Artpole package can allow untrained individuals to easily install the system. According to the CEO, existing outdoor CCTVs have no standardized installation requirements, meaning the individual worker's ability determines the finished installation quality.

Typically the camera, pole, pan-tilt, housing and other necessary equipment were bought from different manufacturers and suppliers - the Artpole system can produce, assemble and ship the products in a "ready-to-use" state, meaning that customers only have to install the system at the desired location. This allows the installation process to be less disruptive of surrounding traffic compared to other competitor products, while also being less restricted by installation costs.

CEO Kim stated confidently that "Artpole is not limited by the CCTV height or size. Increased height or multiple cameras being installed on other systems usually increased the price of the system whereas our systems can maintain its competitiveness by removing these limitations, to maintain competitive prices. Once you experience the convenience of Artpole, you will never think about traditional CCTV poles ever again."

Artpole for various purposes and environments

Artpole can be completely customized based on the customers' wants and needs. The movement unit can be fitted with multiple camera units on the top or the sides of the bracket, or they can be fitted with various equipments, such as a camera on one side and a light on the other.

There is a variety of different products for different needs. Artpole Garden can be used as a part of the entrance signpost at apartment entrances. Artpole General is used to surveille construction and public sites. Artpole High Mast is used near highways, intersections or junctions, airports and harbours or ports safe and Artpole Heavy Duty is used for coastal, border or military surveillance.

The CEO mentions that Artpole High Mast is being produced for a maximum of 30 meters in height, but it can also be manufactured for taller installations based on the customers' needs, which is why the product has high needs for critical security facilities.

The city of Pohang installed a "Smart Coastal Safety Surveillance System" in 2016 in order to reduce the occurrence of various accidents and incidents, which enabled the city to keep a close eye on major beaches using Artpole and heat sensitive, high definition artificial intelligent automatic surveillance program to run an unmanned remote 24 hour surveillance system for an area of 500 meters around the cameras.

Artpole Heavy Duty has been optimized for coastal and border surveillance and has drawn a lot of attention at the 2016 High-Tech Defense Industry Fair held last December. Artpole Heavy Duty products fitted with Thermal Observation Devices have already been supplied and installed, with additional future installations set in plan.

CEO Kim showed his aspiration by stating "We aim to create a safe and beautiful city by encouraging Artpole to be the standard for CCTV poles as the demand for CCTV installations continuously on the rise." ISON is hoping to use the Artpole range to focus on creating a Safe and Beautiful City and are focusing on producing more creative products - proved by Artpole's unconventional designs compared to previous CCTV pole designs.

All Artpole products have a relatively simple design, except for the Artpole Tree line which uses a tree-like pole design, as well as IR camera housing designs resembling birds, squirrels, chameleons and other wildlife animals, in an attempt to create a more natural feeling following the company's aspirations to bring beauty and safety to the city landscape.

Artpole Garden is designed as a signpost, which can be used not only to improve environmental design but to maximize advertisement effects by including logos, advertisement phrases or images matching the user's needs. 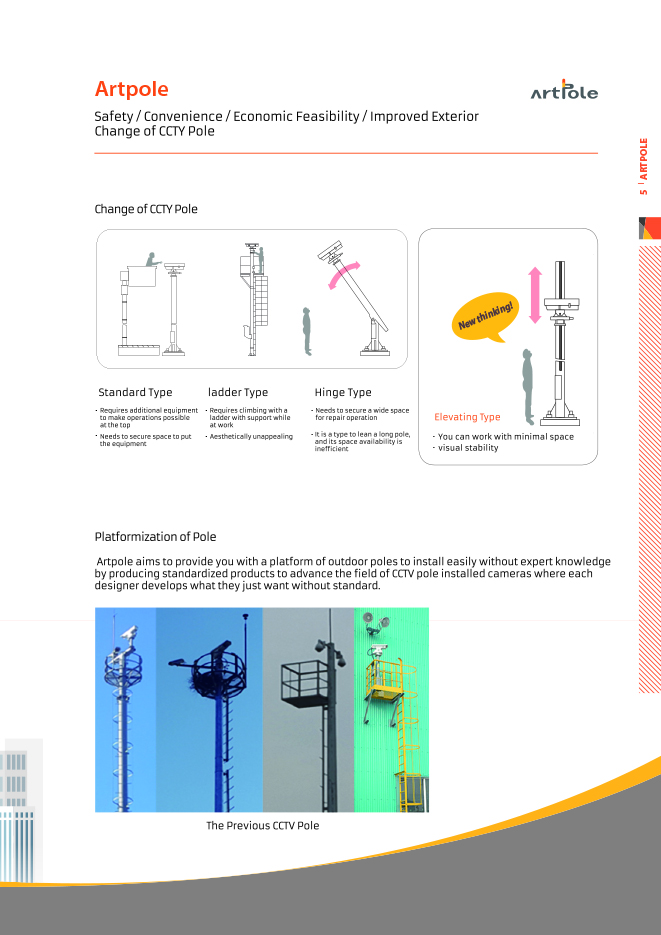 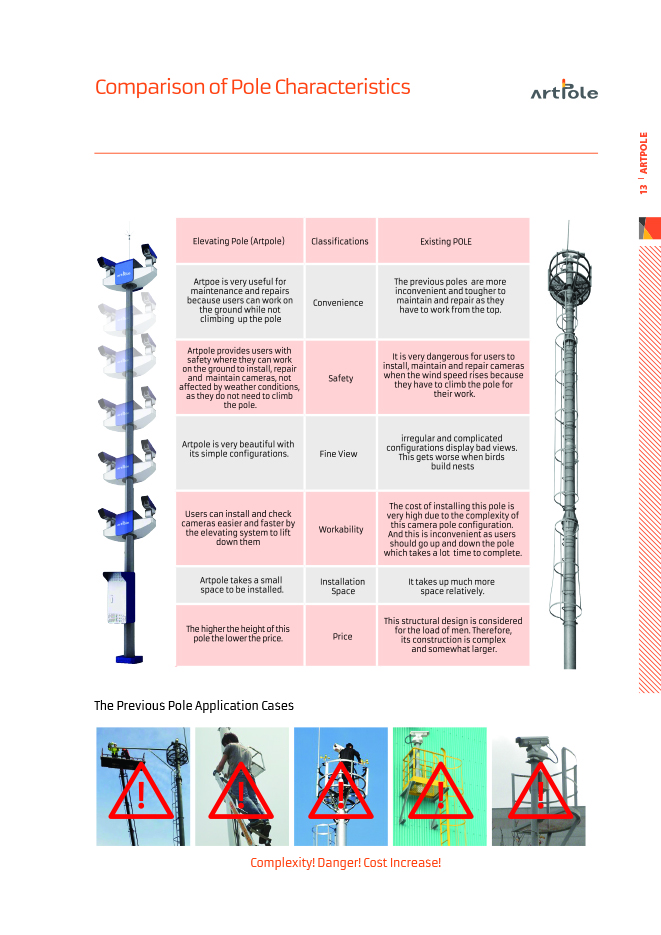 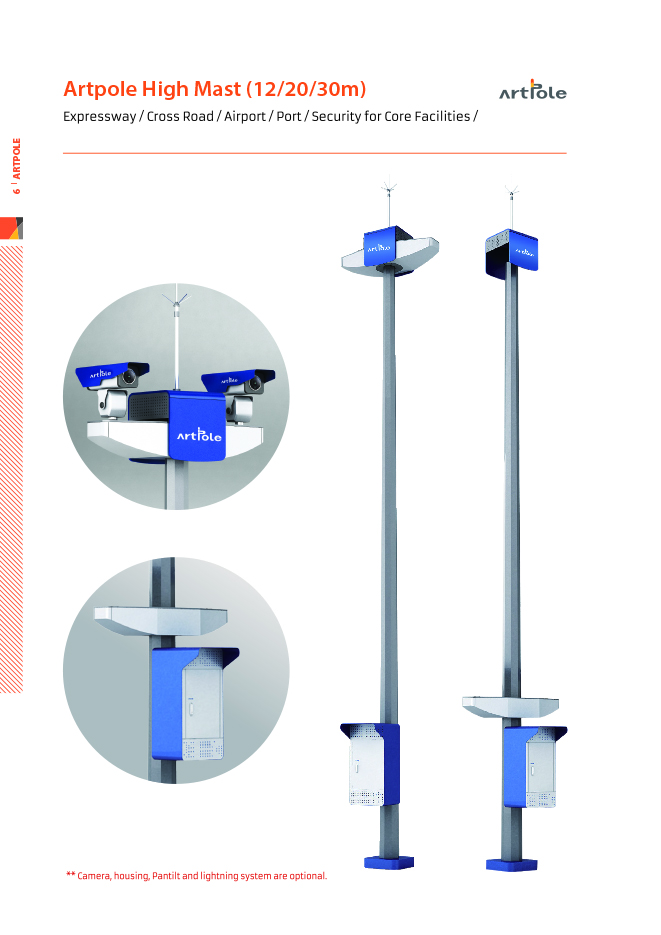 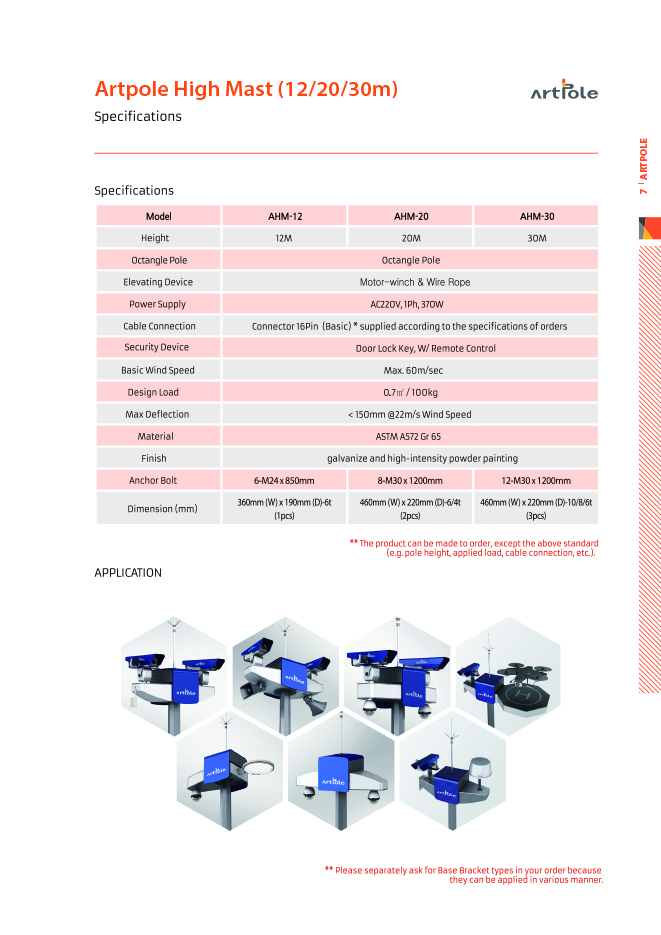 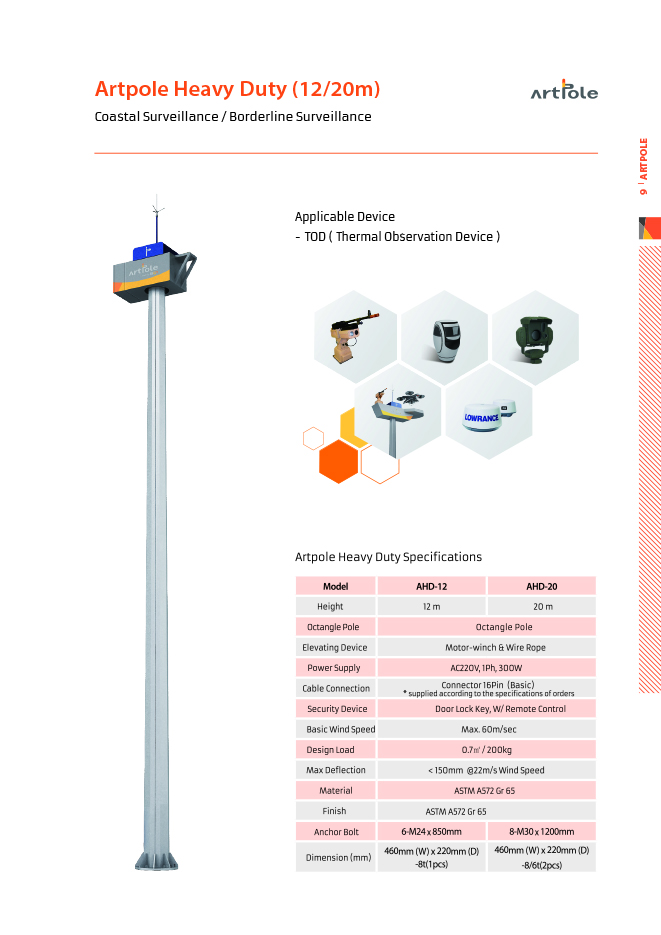 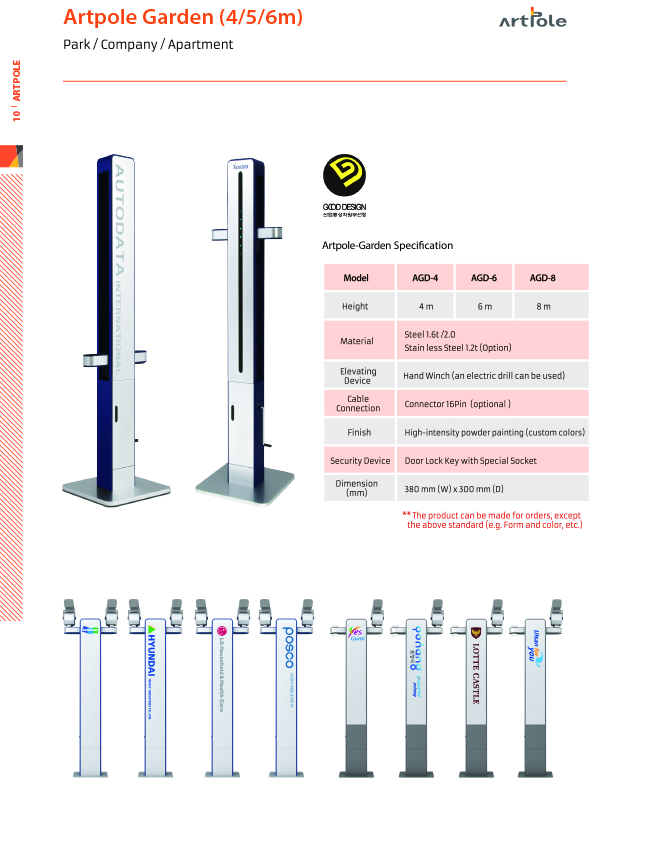 - Vision : A company which utilizes creativity to take the challenge to produce quality products

and share with others! Produce safe and user-friendly products