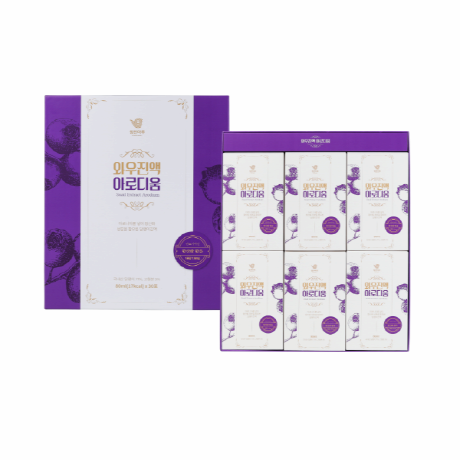 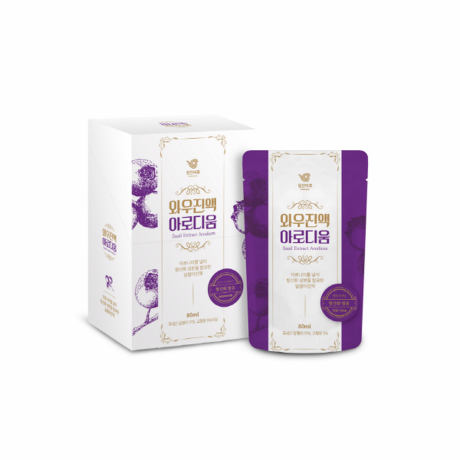 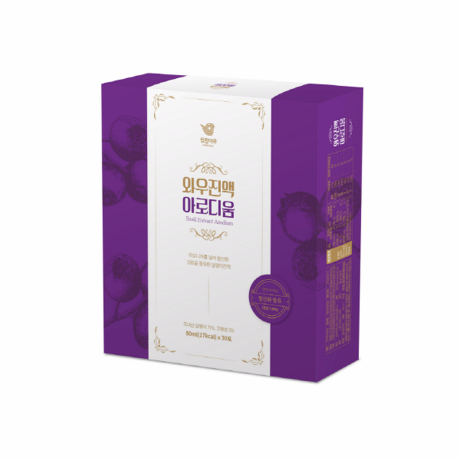 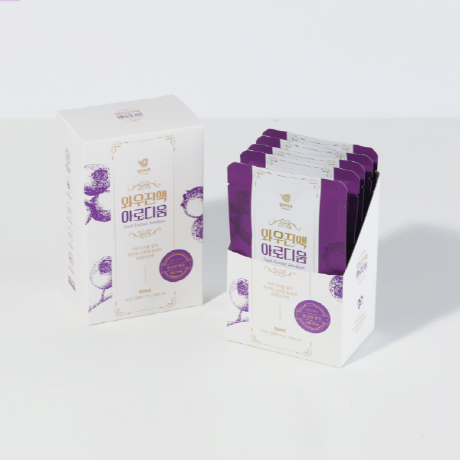 Aronia extract is a special ingredient from Jeonbuk region produced at a low temperature of 85 degrees or less (3,4 times higher than that of living organisms)

Aronia, known as the fruit for king, possesses an antioxidant level of 123 times higher than that of an apple

Best fruit with effect of 70 time the strawberries and 4 times the blueberries (Published by US Department of Agriculture). Aronia's effective Antioxidant and Anti-aging nutrient is widely known to be good for skin condition, immunity, vision protection, anti-aging as well as cancer prevention

Snail nutrient, is a nutrient that has been used for many years where in Europe, it is usually known as the chestnut dish for its stamina boosting effect, the same as that of oriental eel

As mentioned in Donguibogam and Bencao Gangmu, snails are said to be good for symptoms of seasonal flu, stroke, liver disease, hand and foot ulcers as well as rectal prolapse. Also it is good for curing cold hand and feet, regaining energy and both diabetes and fractures problem

Also, the fact that snail mucin is good for skin condition and immunity recently made it one of most widely used element in cosmetic industry

(This product is not a medicine but a healthy food.)

-a person lacking a stamina

-a man of many physical activity

-a man tired from frequent drinking

-People who want to increase immunity

The expiration date is one year(12 months).

precautions : Do not heat it in the microwave as it is

How to eat healthy: on the empty stomach 2-3 times a day, 1pcs

If you want to make a healthy body without side effects, it is usually better to eat healthy food than medicine.

WowDrink Plus is a superior health food that anyone can eat.

WowDrink Plus is one of himchanmaru's snail herbal extracts, the number one product sold online in Korea. It is a high-end product with the addition of ‘galanga’ which is known for its good health such as anti-cancer effect. Wow is the same pronunciation of the old times snail in Korea. To mean amazingly good food, I marked it as wow with similar pronunciation. Snail juice is an unfamiliar food overseas, but it is a familiar ingredient in Korea because it is mentioned in old Korean medical books.(Dong-uibogam, Bonchogangmog.)In Korea, it is especially famous for the health food that athletes eat a lot. All snails that enter are from Korea. In addition to snails, about 20 oriental medicine ingredients (hubs) that go well with snails are added based on traditional medicine. Besides snails, it is important to put in what ingredients and how much. We have obtained patents in Korea for this ratio and low temperature extraction technology. Put ingredients with a patented ratio in a large pot and boil them for over 36 hours by low-temperature extraction. Boil and pack in this deep essence form and it becomes a wowdrinkplus. This type of thicken juice food is called jin-aeg.

it's a type of health food(htealty juice) that eat mostly in the Orient. It is not as light as tea and tastes similar to red ginseng juice. Think of the taste is thick as Oriental medical Herbal Tea . Snail is rich food in Chondroitin sulfate, mucin, collagen, and protein. Traditional famous medical books says snail juices are effective in treating diabetes, skin disease, and bowel disorders, restoring energy, and strengthening bones and joints. We boil the snail shell, which is proven to be rich in minerals including calcium, potassium, magnesium, and phosphorus through component analysis. It appears not only in Korea but also in many medical books in other countries. In the West, Romans also ate it as a health food. in Korea, people who exercise a lot and patients of various kinds eat for their health. (This product indicates that it is food, not medicine.) This food is patented in Korea and passed the FDA standard. it does not preservatives, artificial flavors, colorant and additive . The snail content is about 74%. In Korea, we have achieved No. 1 online sales (based on the number of post-sale sales) and No. 1 in Customer satisfunction.

It is also a sponsor company of the 'World Championship Korea Preliminary Round'(Power Lifting).

Himchanmaru manufactures and sells healthy food. We are a solid patented company dedicated to research. As an award-winning company, we have been featured in the media many times.

When creating a health extract, the accompanying herbal ingredients and method of brewing are equally important as the main ingredient. We hold patent rights related to snail and chicken feet extracts. This is why we are the top-selling company of snail extract online. We have also been broadcasted many times.

Although they belong to the general food category instead of health functional food, our health extracts are beneficial to people’s health. The HS code is 210690.

The health extract patent we hold concerns the mixing of the ingredients and extraction technology.

In Korean traditional medicine, all food items have a compatibility level. It is important to mix all ingredients to highlight the benefits of the main ingredient while improving the weak ones.

Another thing worth mentioning is our extraction method. Normal extractions are carried out by boiling the ingredients in hot water for a few hours. In contrast, Powermaru products are extracted in low temperature under constant pressure for over 30 hr. By matching ingredients and extracting them at low temperature, our products create an excellent flavor.

Our products are made with pure herbal ingredients and additives are rarely added. We believe that additives are not beneficial to health. That is why we will continue to restrain from using additives when developing new products.

We think it's better to operate a place with small members such as a hospital, dermatology, oriental medicine clinic and massage shop than the way it is sold at a large discount store. It is because if you eat steadily, you must come back again. 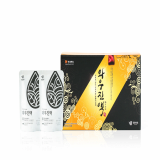 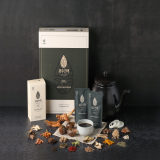 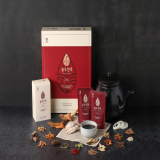