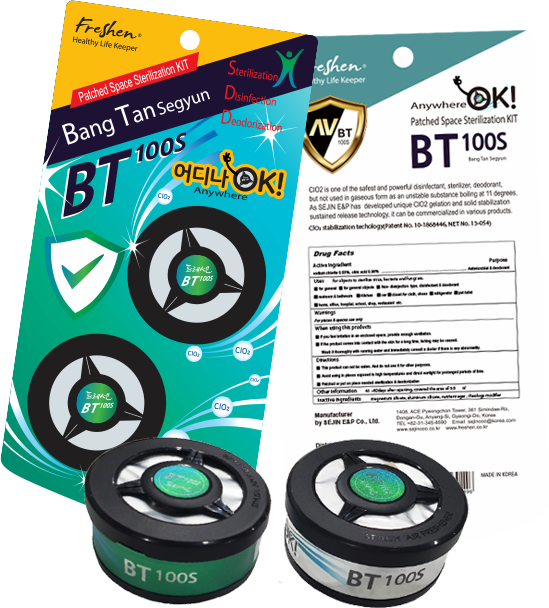 Invisible Virus, Visible Guard, mainatains freshness, You have never seen these miracles before

CIO2 is one of the safest and powerful disinfectant, sterilizer,deodorant,but
not used in gaeous from as an unstable substance boiling at 11 degrees.

Its strong oxidation, even in very small amounts, directly acts on the cell membranes of bacteria

CIO2 gas is volatile at 11 degrees Celsius, but
we have a patented packaging technology that slowly emits it and maintains
keep the freshness longer because. CIO2 gas suppresses C2H4 gas in near air

We both CK Corporation as a trader and SeJin E&P developer have developed unique
CIO2 gelation and solid stabilization sustained  release technology,
As a result, we  have succeeded in commercializing in various forms and have exporting.

Using these principles, For everyone can use them in daily life with easy,

Gel pack types,patch card types, Card type are being made and are being sold

We are an provider and export window of  innovative products  being "Freshen"
which made by Sejin E&P in  Republic of Korea.

It has an excellent effect of delaying the time it decays and whithers away
which might be occured great demages in  the process of  distributing.
.
Seeing is believing , Please try to  test it, you would be very satisfied it