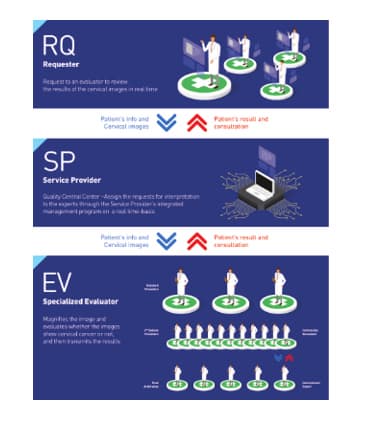 NTL has further advanced the idea of telemedicine and developed a new Web-based Cervical Cancer Screening System (TeleCervico®) which is more practical, accurate and reliable in the present technological world. TeleCervico®(Digital Cervicography® System) uses a digital "Dr. Cervicam®" camera which takes digitalized pictures like a Cerviscope® camera. TeleCervico® incorporates the internet network for remote-evaluations of digitalized pictures in cooperation with NTL. This digital Cervicography® system can now replace the analogue "film" system by digitizing the same process and using the internet to replace the couriers.

TeleCervico® is significantly efficient in QC(Quality Control) management and time-saving ; additionally, the certified evaluators are available at any time, at any place while the existing analogue system requires a long period of time because of geographic distances and the delivery process.

TeleCervico® functions under a TeleCervico® computer network. It is not just a single SYSTEM but a NETWORK of systems.

Three independent but integrated IT programs are connected to a central database with active Internet communications between all modules and the central server. All parties have inquiry access via the web using just a web browser. At the initial patient consultation, the requester captures images and sends them to NTL via the internet. NTL will serve as a service provider for the screening service. NTL records all submitted cases, and on completion, allocates the cases to an "on duty" evaluator and sends the case files via the internet. The evaluator receives the cases and images, then analyses the images and records his evaluative opinion sending the results to NTL via the internet. Finally NTL passes the results to the requesters via the internet. A diagrammatic representation is shown as below. In order to assure the accuracy and reliability of TeleCervico®, NTL has ensured excellent quality control in the evaluation process. The standard procedure is to use a single on call evaluator for all the requested cases. All evaluators are from an accredited evaluator panel established for TeleCervico®. For any difficult case or query, a second opinion is sought in order to arrive at a consensus before the result is returned to the requester. If any controversy still exists, it might require final arbitration by an international expert in the field. Furthermore, mandatory, regular audits of every evaluators' results are performed and on-going Community consultations are carried out to resolve any issue that may occur.

To ensure compatibility of the digitalized Cervicography® system, a clinical study using TeleCervico® in 100 cases recruited from five centers were analyzed. Cervical images were taken separately using both analogue camera (Cerviscope®) and the digital camera (Dr. Cervicam®) with each patient.

Three images (analogue image, digital image, scanned digitalized analogue image) were prepared in each patient. Eight evaluators of the Korean Cervicography® Research Group evaluated the images on both TeleCervico® and 35mm slides with a time interval between evaluations of each image. The analyzed intra-observer variance among evaluation results of conventional analogue images taken by Cerviscope®, those of digital images taken by Dr. Cervicam®, and those of scanned digitalized analogue images showed a significant correlation statistically. Overall confidentiality was as high as 0.9551. The conclusion showed that there were no differences between a conventional analogue Cervigram TM and TeleCervico®. TeleCervico® proved to be a new telemedicine technology for cervical cancer screening which can overcome the disadvantages of a conventional analogue Cervicography® system. This study was reported to the ASCCP (American Society for Colposcopy and Cervical Pathology) in 2004.

1. Introduction
Pap smear is used to screen for premalignant cervical lesions, thus leading to the reduction of cervical cancer incidence in developed countries. However, the costs for the construction of an initial network, collection, logistics and the cytologists' education are enormous, requiring a long period of time, to obtain excellent results.

Even though Pap smear is still accepted as a successful method for cervical cancer screening, many studies have challenged the actual sensitivity of the Pap smear, ranging from 80-95% and a poor sensitivity result as low as 51% had been reported (AHCPR 1999).

Many of these reports led to the search for other alternatives. In 1981, Adolf Stafl, invented a diagnostic method called "Cervicography®" after he graduated from the Medical College of Wisconsin and became a colposcopist. This Cervicography® was proposed as one of the early adjunctive tests to Pap smear. Since that time, there have been numerous developments in Cervicography® proposed by Adolf Stafl, these are Cervicography® (Cervical Cancer Screening System), Cerviscope?? camera, Cervigram TM slide, Cervigram TM picture, and Digital Cervicography® system. (These are either the registered trade marks or service marks of NTL)

The early Cervicography® utilized an inexpensive optical instrument - a Cerviscope?? camera which took pictures and documented the cervical findings as an adjunctive evaluation of a patient with an abnormal Pap smear or for cervical cancer screening along with the Pap smear. The camera was a portable 35 mm camera with a fixed focal distance camera lens and a mounted flash.

Cervicography® was performed under a magnification (x16) with a comparable maximal depth of focus similar to a normal colposcopic examination. Dr Stafl stated that Cervicography® offered an opportunity for critical assessment by expert colposcopists, and provided permanent records of the cervical findings.
As the camera was in focus to visualise the cervix, a few pictures with the highest possible resolution could be taken under an intense light source allowing for a short exposure time. The films, together with the patient's details, were then sent for processing, development and evaluation.

An experienced colposcopist and evaluator would assess each cervicographic slide when it was projected on a screen "10 feet or greater in width", and was observed from a distance of 3 feet.

In his early study, Stafl (Stafl 1981) reported his finding from 700 women who underwent Cervicography® and demonstrated that the diagnostic accuracy of Cervicography® was not significantly different from colposcopy and colposcopically directed biopsies. He also stated that inexperienced individuals can also perform Cervicography® satisfactory.

August N 1991 also studied the inter-observer errors of Cervicography® and compared eight NTL certified evaluators with their diagnostic categories in 500 patients. Each patient's cervicographic pictures were independently evaluated by each of the eight evaluators without knowing the patient's history and physical findings. The result showed a high degree of inter-observer agreement of the Cervicography® results. It also demonstrated that cervicographic findings as reported by evaluators were significantly reproducible when reviewed by an individual experienced evaluator.

In Dec. 1983, National Testing Laboratories (NTL) licensed the Cervicography® service worldwide, and NTL appointed evaluators to evaluate CervigramsTM sent to them before the reports were returned to NTL and the requesters. a. Case turnaround time
Same day (Maximum 1 day) compared to the 7~10 days of the analogue
Cervicography®

b. Process quality is excellent and digital imaging has greatly reduced the probability for process error.
TeleCervico® has built in process and quality control functions while the analogue
system might have processing failures, or processing defects due to human
error.

c. Improved documentation is possible.
Digital delivery and printing of process documentation is fast and efficient.
Evaluation reports and other documents are retrievable anytime on the
Internet, once the result is available.

d. Security is assured.
All transmissions are compressed, encrypted and password protected.

This system represents a breakthrough in cervical cancer examination as it makes the existing off line examination possible online using Internet. Based on the technology and know-how accumulated for the last 13 years and continuous challenging spirit, NTL HEALTHCARE will take the initiative in global cervical caner screening market by integrating all the cervical cancer-related examinations and strengthening precision control.