OKF Corporation / World No 1 / Multi Beverage Factory/ World No 1 Aloe Juice Factory OKFis a manufacturer producing approximately 750 types of drinks and exporting to165 countries including America, Europe, Asia, and Africa. Especially, AloeVera King by OKF is world No.1 brand in the industry, occupying 76% of aloevera drink market. A wide variety of OKF products are being sold by various distribution channels such as groceries, drug stores,convenient stores, and super markets (Costco, Wal-mart, Tesco, Carrefour, Metro,Super Value, Kroger, etc) and with its quality products, OKF has won international awards such as ITQI, Beverage Innovation, American Masters, etc. In addition, it has won Monde Selection awards three times which can be compared to the quality stars of a hotel or those of the Michelin Guide, boasting its astonishing taste and quality. Also OKF has been nominated as World Champ Corporation which is a kind of the license Korean government grants to bring up a world class corporation and Global Star Corporation. Besides, almost all of prestigious awards in the industry such as President’s award, the first class –manufacturing corporation, the first class – product certification are what OKF has swept for achieving 100 million dollars exportation. The state of the art factory of OKF islocated in Andong city, Gyeongbuk-do with the world’s highest level oftechnology and scale. It consists of 8 main lines and 9 sub lines with high-tech automatic equipment which is capable to produce more than 8 millionbottles a day, 3 billion bottles a year; the economic value amounts to USD onebillion in 720,000 square feet of manufacturing field. The principalcertifications that OKF has are IFS, FSSC 22000, ISO, GMP, HACCP, Kosher,HALAL, NOP (EU Organic Certification), GOST, BRC, SGS etc., which makes OKF products moretrustful products to its worldwide consumers. Starting with completion of 1stfactory in Andong city in March 2010, 2nd factory in April 2011, 3rdfactory in August 2012 in sequence and consecutively ﻿OKFdid complete 4th factory and 3rd distribution center in June 2013 todistribute stably our products having the best quality and showing ourlimitless investment in facilities to be abreast of other international bignames. OKF is running a high-tech laboratorypacked with professionally skilled researchers armed with experience from theinternational conglomerates. Although now OKF has been prepared to cover worldmarkets with its quality products, our efforts won’t stop there when it isabout investment in facilities and tech- development. Now OKF is the internationallyrecognized corporation for devoting its heart and soul to producing premiumhealthy beverages and has been sparing no effort to produce and developwhatever customers want.

[Product Description] OKF Smoothie Our premium drink, Smoothie 7, blended with fresh and healthy fruits packed with nutrition, is a quick, portable snack or meal replacement for consumers. It delivers a tangy and sweet taste of fruits and supplies multi vitamin nutrition which is easily lacking in your daily life. Also, it is fun to choose your favorite color beverage ...View more 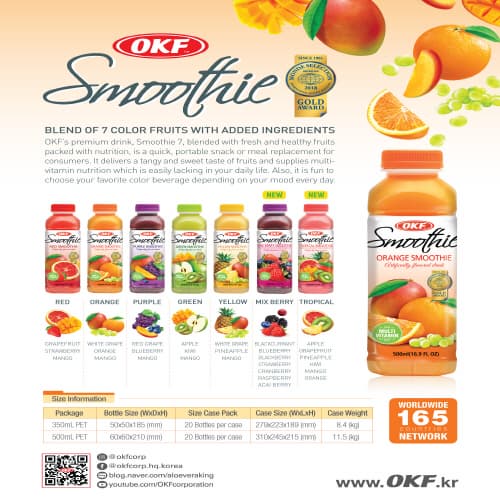