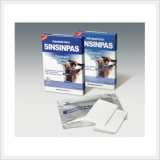 Receiving trade mediation support from KITA and exporting to the Middle East! – Releasing pain relief patches in the Middle East to relax the aching shoulders of Middle Eastern buyers!

Founded in September 1959, SINSIN PHARM is an expert enterprise on pain relief patches. In the aftermath of the Korean War, many people suffered severe body pain from heavy physical labor but most of them could not afford to buy expensive foreign medicine. Based on this idea, the founder of SINSIN PHARM began to manufacture pain relief patches that even the general public could purchase at an inexpensive price.

SINSIN PHARM produces up to 100 different kinds of medical supplies and sanitary aids including pain relief patches and bandages, and “SINSIN PAS AREX”, its primary product, is currently being sold in convenience stores as a household medicine. Moreover, starting with its first export in 1971, it has been exporting a variety of products from pain relief patches to bandages and cooling sheets to 35 countries around the world including the United States and Canada.

△ Notable products of SINSIN PHARM
The medical supplies market of the Middle East region continues to grow in size and imports most of its products, which makes it attractive, but it is strongly monopolized by the U.S. and Europe. However, it is believed that Korean companies may enter and approach the market more easily through a partnership with a competent local agent.
A representative of tradeKorea’s CBT Matching Team introduced SINSIN PHARM to the U.A.E.’s Company I in May 2016. Based on an investigation conducted by the tradeKorea representative, the buyer is a professional import and distribution company that mainly handles home appliances and healthcare products and also owns a solid distribution network in not only the Middle East but also Africa and CIS regions.
When the representative of tradeKorea’s CBT Matching Team first introduced the buyer, SINSIN PHARM was not quite interested in the Middle East region as it was working on exports to other areas but, once it was verified as a genuine buyer, it carried out discussions and consultation with the buyer for about 6 months. As a result, it has signed 3 export contracts until now starting with its first export in December 2016. An overseas sales representative of SINSIN PHARM said, “When we got a call from KITA about the buyer matching, we actually did not expect much…but we were introduced with such a great buyer to whom we have continued to export our products so we are extremely grateful”, and sent a thank-you letter.
SINSIN PHARM will continue to utilize tradeKorea’s buyer matching service to discover new buyers. In particular, it strives to discover new buyers in Southeast Asia based on its success in export through tradeKorea. Although pain relief patches are a familiar product in Korea and Japan, they are not well known in the hot Southeast Asian region. However, as many domestic products have been introduced thanks to the recent Hallyu wave, demand for pain relief patches is slowly increasing as well. Thus, SINSIN PHARM plans to participate in “Medical Fair Asia 2018’” to be held next month in Singapore and showcase its samples at tradeKorea’s PR exhibit.
Next Mistake acknowledged, crisis overcome, and order successfully restored despite the first buyer claim!
Prev Young, 28-year-old CEO who took over family business achieves first export to Romania through KITA’s VIB matching service!!