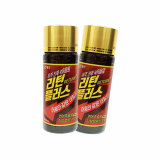 The Successful Export of Hangover Cure Drink Made by the CEO with Chemical Engineering Background! -First export to the U.S. with the assistance of the person in charge of matching-

Korea's hangover cure drink market is valued at about KRW 180 billion, with more than 40 new hangover cure drinks disappearing after being released every year. Among them, products that are appreciated by consumers for a long time are less than 5 %. As a company founded in October 2017, Aezin's CEO, Ha Man was originally a lead researcher at the company that made the world's first solid hyaluronic acid filler.

The CEO, Ha Man, who had a master's degree in chemical engineering and prepared for a Ph.D degree at medical school, studied for a long time on hyaluronic acid at his previous company.  Based on the fact that hyaluronic acid is widely used in cosmetics and food products to improve skin elasticity and boost moisture, he decided to develop a hangover cure drink. To treat the hangover, he chose the salmon extract. Also, he added the ingredients aronia and xylitol to it and made a highly effective and the most hydrating drink for curing the hangover in Korea. Since a lot of efforts were made into developing the product, it would have been nice if active marketing activities were carried out, but it was not so easy to sell the product. Much time was spent on domestic distribution, but the entry barrier of the hangover cure drink market was too high because of the existing big brand dominating the market. Excluding the major distribution channel, the company was unable to be succeed with personal selling. Like grasping at straws, the company requested help from the Trade Korea CBT Matching Team.

The person in charge of the matching met with the CEO Ha Man for more than 5 times to discuss about the product's strengths and weaknesses, as well as their marketing plan. The two shared opinions about various things even at weekends and evenings, such as ways to improve the product packing and analyzing competitors' products and new trends. Two buyer matching meetings were held with the U.S. buyers, and luckily, the company received a positive reply from one of the buyers. The official discussion about export took place, but there were many issues that the company had to learn and handle as it was their first export, including proving the country of origin and reviewing the FDA approval.

The CEO Ha Man and the person in charge of the matching reviewed the trade documents and procedures together and finally exported 4,000 bottles of hangover cure drinks to the U.S. However, difficulties arose also during the import clearance in the U.S. Since it was the first export of Aezin and the first import of hangover cure drink products in the U.S., it was subject to the spot check during import clearance and went through the FDA reinspection. Fortunately, the company completed the clearance procedure after much trouble by submitting documents on testing the ingredients.

The CEO Ha Man experienced a lot of trouble during the import clearance procedure, but he expressed his appreciation to the Trade Korea CBT Matching Team for their assistance in making the first export a success.