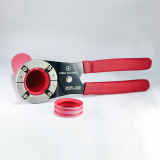 The CEO of Asea Precision, a domestic market-oriented company, visited the CBT matching team of TradeKorea to seek advice on the development of overseas markets for its PB and CD pipe cutters. He was passionate about entering overseas markets despite having difficulty in communicating in English and scant experience of export sales activities.

When the president visited TradeKorea, the latter was making preparations for participation in ‘Tool Japan’, an international tool fair due to be held in Japan. TradeKorea recommended that Asea Precision also participate in the tool fair by setting up its own booth and exhibiting its product lineup in order to conduct a kind of overseas market survey, a proposal which the president readily accepted.

Sometime later, TradeKorea’s matching team received an inquiry from a buyer in Hong Kong who runs a sourcing office for a large-scale German distributor. The buyer wished to obtain information about price competitive tools of good quality on behalf of the German HQ, and showed particularly keen interest in the pipe cutter products of Asea Precision, among the several companies recommended by the member of the matching team.

TradeKorea provided the Asea Precision product catalogue and pricing information to the Hong Kong buyer, but received no feedback from him for several months, leading Trade Korea’s matching team and the president of Asia Precision to believe that the buyer was not interested in the company’s products and eventually forget about a potential business deal with the buyer. Then, out of the blue, the Hong Kong buyer asked Asea Precision to review, sign and return the attached a ‘Supplier Agreement’.​

As Asea Precision’s president was unable to review the Agreement because it was written in English, tradeKorea matching team translated it into Korean and discussed the overall contents of the Agreement with him. The president finally signed the Agreement after deciding to go ahead with the business deal with the global company. The head of the matching team then reviewed the commercial invoice and packing list to be prepared before the shipping date, and payment of the contract amount and product shipment were successfully finalized.

The buyer promised to provide feedback on product sales at a later date, while the president of Asea Precision expressed his deep gratitude to the matching team of Trade Korea for their invaluable assistance and support for the successful conclusion of the contract, although he was not quite certain how local consumers would react to the shipped products as it was only the first round of the transaction.

Next Transactions was suspended because a trade commission house was out of contact. But direct export was resumed by support of the association.
Prev The Successful Export of Hangover Cure Drink Made by the CEO with Chemical Engineering Background! -First export to the U.S. with the assistance of the person in charge of matching-