1. No More Low Quality Films Which Lower the Definition of a Display Screen.
Now, cast the prejudice aside that you could have the best definition without attaching a screen protector film on a smartphone display screen. If you are not satisfied at existing screen protector films which have been reducing visual quality, then you will surely need a HD real glass -- FIX ULTRA GLASS FILM.

2. With 100% Real Glass, Clearer and Sharper Images as if Not Wearing a Film.
FIX ULTRA GLASS FILM is not a typical glass film of a low quality. It is a 100% real glass high quality film with a high transmittance and the best definition as attaching another display screen on your smartphone screen.

4. Relieve Anxiety against Corruption by Attaching a High Intense Screen on Your Smartphone Screen.
Don’t worry about the expensive cost of repairs caused by frequent screen damages. FIX ULTRA GLASS FILM which perfectly protects your smartphone screens is the best insurance to prevent the burden of screen damages and expensive repair costs at the same time.

5. 0.23mm ULTRA GLASS FILM with the Super Precision Glass Processing
0.23mm FIX ULTRA GLASS FILM, which has been compressed in the ultra-thin glass processing technology of FIX, has better transmission, definition, tactile impression and any other aspects compared to other typical 0.4mm glass films. The best contact force and the thickness which is similar to general high quality films make you not feel any incompatibility

6. High Sensitivity Film, Reducing Thickness and Enhancing the Tactile Impression,
With a smooth glass texture, you can feel a great fluidity, an excellent sense of touch screen and a rapid reactivity.

7. With the Function of Blocking Irregular Reflection and Having High Permeability, the Clear Picture Quality Feels Like Nothing Attached.
FIX found the solution to the disadvantages of a low-cost film which makes your smartphone screens cloudy and blurry because of diffused reflection. FIX ULTRA GLASS FILM provides high penetration and a clear screen as if putting a transparent glass on your screen. Now enjoy your smartphone screen as the original definition.

9. Oleophobic Coating Protective Film Prevents Pollution and Keep a Clean Screen
Oleophobic coating function, which blocked stain such like oil and finger print, provides fresh usage and clean screen. Water drop which is not scattered on the screen can prove the strong coating function.

10. Soft & Smooth Touching Anywhere on the Screen with +R CUT Rounding
The edge of the real glass which might be sharp is trimmed with +R CUT skill to increase the soft -touching and grip feeling. It is the consider of FIX for customers to feel soft & smooth touching anywhere on the smartphone screen.

12. Highly Efficient Special Silicone - Gluing Agent for Keeping Performance and Quality Permanently.
FIX ULTRA GLASS FILM does not use the cheapie gluing agent which can be separated and transformed easily. FIX uses the highly efficient special silicone – gluing agent which can stand under changeable temperature and environment, so film can be kept for a long time.

13. Easy to Attach Even for the Inexperienced People
FIX uses the special gluing agent, so it can reuse and decrease the damage. It minimizes the bubble, so anyone can attach easily.

01. Clean the screen
02. Remove the attached side film
03. After put the film on the screen, fix the exact direction
04. Push the center of film slightly then attached on whole screen easily.
* Tiny air bubble will disappear after 1~2 days. 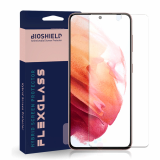 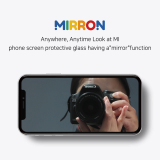